--
Resources > Glossary > City Spotlights
New York City
www.fusia.net/nyc | Return
There is a great deal of variation between different cities in the US when it comes to accomodation, transportation, weather, and culture. This section presents important details and key points about a handful of the major US cities.
New York CityBostonPhiladelphiaWashington DCDallasHoustonLos AngelesSan Francisco & Bay AreaSeattleChicagoMiami
https://www.fusia.net/img/ccip/20190623_STATUE/YY.jpg
Items:
org - ccip
date - 20190623
filename - YY 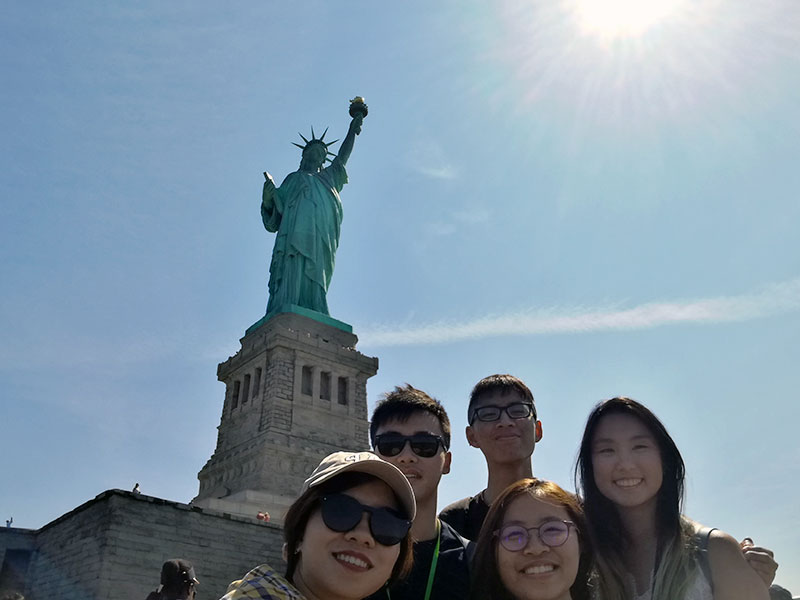 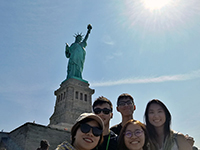 In late fall and throughout the winter, the weather can be bitterly cold, with snow fall typically occurring between late December and early March. This makes it essential to invest in warm clothing, such as heavy jackets, scarves, and boots.

During the spring and summer, the weather becomes much warmer and humid. During these times, one should wear lighter articles of clothing, such as shorts and t-shirts. It is also during the warmer months that there is more rainfall, which makes it essential to have an umbrella or a raincoat at the ready.

During the summer and early fall, tropical storms and hurricanes from the south can make their way to NYC, which makes it essential to pay attention to any weather advisories that may come up.
Public transportation
As the busiest city in the nation, New York City has a plethora of public transportation options. Alongside featuring the busiest and only 24-hour transit system in the state, it is also a major hub to nearby coastal cities.

New York City’s public transportation system is run by the Metropolitan Transportation Agency (MTA). Within the city, one can navigate the five boroughs easily without the use of a personal vehicle. In addition to walking, you can ride with the bikeshare service Citibike. Most buses and subways use MetroCard/Tap to Pay with standard fare of $2.75 (note: this does not apply to interborough express buses, which charge $6.75, and regional rail like the LIRR and MetroNorth). For daily commutes, consider buying a 30-Day Unlimited MetroCard, which allows for unlimited usage for an entire month after a one-time payment. Also, download the LIRR Traintime or MetroNorth Traintime official apps for regional rail and the unofficial Citymapper or Transit apps for NYC transit realtime arrivals and updates.

New York City is known for its yellow taxi cabs, which can be seen in large numbers throughout the city. Other options include Uber, Lyft, and car service. To nearby coastal cities such as Boston, DC, and Philadelphia to which one can easily access using interstate buses or Amtrak trains. For commute and sightseeing, New York Water Taxi offers both. There are also discount intercity shuttle buses that run among the three main Chinatowns in Manhattan, Brooklyn, and Flushing, Queens.

- Yellowcab: Flat rate to Manhattan of about $50 - Click HERE
- New York Water Taxi: Fast vessels along the East River and Hudson River - Click HERE
- Interstate bus: A ride to DC is around $18-30, to Boston is around $30, and to Toronto is around $90 - Check out Greyhound, Megabus, Flixbus, and Peter Pan
- Interstate train: Check out Amtrak for service along between DC, NYC and Boston
- Budget car service: 24/7, from Flushing to JFK costs about $22+, e.g., HERE (drivers may not speak English)
- Chinese shuttle bus: $5 Flushing to Brooklyn, $4 Flushing to Manhattan, $3 Brooklyn to Manhattan (drivers may not speak English)
Accommodation
While Manhattan is where the majority of New Yorkers work, most choose to commute from other places. Residents of the outer boroughs (Brooklyn, Queens, Bronx) can take the subway or (Staten Island) the ferry. Long Islanders can use the LIRR for commuting, while New Jersey residents rely on the PATH train. Even upstate New Yorkers will work in the city, using MetroNorth to travel. Examples of neighborhoods outside of Manhattan:

Astoria & Long Island City: Right across the river from Manhattan, these are up and coming neighborhoods that are seeing lots of development in the coming decades. Initially a Greek area, it is now a melting pot of cultures. Note: Long Island City is not the same as Long Island.

Flushing & Brooklyn Chinatown Areas: With a large East Asian population, these neighborhoods are densely populated and accessible to the rest of the city. Not only do they have vast public transit options, but they also feature many stores that cater to the local East Asian culture.

Forest Hills & Rego Park: Being located closer to Manhattan than Flushing, this area features numerous large shopping centers (QCM, Rego Center). With countless restaurants and outdoor eateries, the food options in this area are endless. The population is mixed, with young and old families alike choosing to reside here.

Jersey City & Hoboken: Many young professionals have chosen to make this area their home. With new high-rise buildings popping up, prospective residents will have a great view of Manhattan. Keep in mind, however, that prices here can be higher than Brooklyn and Queens.
Places to visit
In a city known for its diversity, there is much one can do to experience the unique cultural blend that the city has to offer. Exchange visitors can easily fill up their after-work and weekend schedule with fulfilling experiences.

Nature
- Central Park
- Brooklyn Botanical Garden
- Jamaica Bay Wildlife Refuge
- Far Rockaway Beach
Things to do
Listed below are some major upcoming events that we would recommend you check out: